SPCE AT A GLANCE

Sardar Patel College of Engineering under the management of the Bharatiya Vidya Bhavan, was founded by Kulapati Dr. K.M.Munshi. It was established to meet the growing demand for engineering talent. The college was inaugurated by the first Prime Minister of Independent India, Pandit Jawaharlal Nehru in 1962. The college is dedicated to Sardar Vallabhbhai Patel, an eminent nation builder of independent India. The college is affiliated to the University of Mumbai for full-time degree, part-time degree and post graduate degree courses and is run under the management of the Bharatiya Vidya Bhavan.

The parent body, Bharatiya Vidya Bhavan was among the first educational trusts to have realized this need and further the interests of aspiring engineering students and also meet the needs of the challenging world of business. The college has gained an excellent reputation in the field of Technical Education. SPCE is one of the few colleges that has received Grade A+ rating for its aided courses and an A Grade for the un-aided courses from the Govt. of Maharashtra which certifies the spirit of excellence that the Institute has symbolized and always practised. 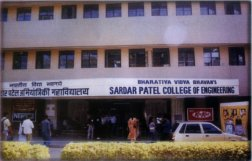 Sardar Patel College of Engineering, one of the top 5 engineering institutes of the state, stands apart as a symbol of quality in engineering education. It has evolved over the years into a citadel of engineering thought and learning. This has been possible because of the dedication of its competent faculty, committed students, its mission to influence the quality of engineering education in industry and the ability to bridge the gap between an academic institution and a challenging business world.

SPCE students have maintained a proud tradition of excellent academic records by securing high ranks, gold medals and other awards in the University Examinations.

SPCE has successfully implemented innovative ideas in the field of Technical Education. This is the first college (affiliated to Mumbai University) to start part-time degree and post graduate courses. All part-time courses attract good response and are well appreciated by diploma holders and engineering graduates in industries. The college has produced more than 7000 Graduate and around 100 Post Graduate Engineers. Many of our past students are now leaders in their professions and today SPCE ALUMNI can be found in all public and private sector organizations operating in diverse fields, often holding senior and key positions in the organization. 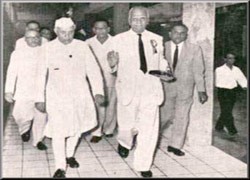 The total outlay of this project was Rs.70 lakhs. The central and state governments contributed Rs.20 lakhs and Rs.10 lakhs respectively while the Bhavan contributed Rs.28 lakhs. The Sardar Patel Memorial Hall Committee and the Nizam's Charitable Trust donated Rs.1 lakh each and the remaining amount of Rs.10 lakhs was collected by means of grants, donations and advertisement revenues.

The foundation stone of the college was laid on 17th September 1961 by Shri Y.B. Chavan (the then chief minister of Maharashtra who later became the defence minister of India) who had taken a keen interest in the fulfillment of the project. Sardar Vallabhbhai Patel was closely associated with the Bharatiya Vidya Bhavan and in 1946 he was elected an honorary member of the Bhavan in recognition of the keen interest he took in the activities of the Bhavan. It was thus decided that naming the Engineering College after the late Shri Sardar Patel would be a fitting tribute to the "Iron Man" of India.

THE INAUGURATION: It was on 19th August 1962 that there was a huge gathering at the Bhavan's campus in Andheri. There was a mood of joy and festivity as thousands of students, parents and distinguished men and women from all walks of life came to take part in and witness an important and memorable function i.e. the inauguration of Sardar Patel College of Engineering. 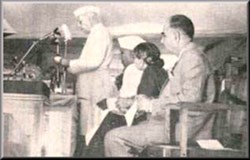 The shamiana specially erected on the Bhavan's ground for the occasion was packed to capacity and a huge cheering crowd had to be kept outside for want of space. It was a golden day in the history of the Bharatiya Vidya Bhavan for the college was being inaugurated by none other than Pandit Jawaharlal Nehru, the then Prime Minister of India.

Pandit Nehru who flew down from the capital especially for the occasion paid tribute to Sardar Vallabhbhai Patel, his long time aide during the freedom struggle and expressed his happiness at having to associate himself with an institution named after such a great man.

Dr.K.M.Munshi the Kulpati of the Bhavan welcomed Pandit Nehru and said that his visit was yet another landmark in the history of the Bhavan. Dr. Munshi added that the Bhavan stood for the reintegration of Indian Culture and its aim was to revitalize the fundamental values of the land to meet the needs of the technological age. During the course of his inaugural speech, Pandit Nehru stressed on the importance of engineering education and the training of a skilled cadre of technical personnel. Pandit Nehru also referred to the extraordinary feat of the Russian "Twin Cosmonauts" and said that all differences and distinctions which separate us would vanish and the world would become one. He affirmed that, "Trained men can rebuild a country; money cannot do it. Its only hard work, intelligently directed that produces results". Also present with Pandit Nehru were politicians and people of great repute such as Shri Morarji Desai, Shri Y.B. Chavan and Shrimati Vijaylaxmi Pandit.

THE FIRST ANNUAL DAY : The first annual day of the college was held on November 9th 1963. The honourable Dr. Zakir Hussain, the then Vice-President of India was the chief guest. In his address to the gathering, Dr. Hussain referred to the task of building a great nation and said," The work of building it up has to continue from generation to generation. The generation that is being educated and trained here has to take up its due share in this process". Dr Hussain encouraged the young students that there was a bright future awaiting them and that as engineers, they would have the task of taking the country forward into a new technological era.

THE FIRST COLLEGE MAGAZINE : The first magazine of the Sardar Patel College of Engineering was appropriately titled "SUKARMA" which the editors believed was symbolic, standing for all work that is good and beneficial to mankind. Its publication and success was due to the combined efforts of the staff and the students of the college. This magazine definitely infused inspiration in the students to take a keener interest in literary and various other activities leading to the multi-faceted and wonderfully diverse college that S.P.C.E. is today.

ONLY REGISTERED MEMBERS CAN LOGIN
Sardar Patel College Of Engineering © 2016 All rights reserved.